From sleepy islands in the south to jagged karst mountains in the north, this couple fell in love with Laos.

The rickety wooden ramp creaked as our Yamaha XT660 rolled along it and onto the bobbing boat. We paid the boatman and squinted as the mighty Mekong River splashed our faces as we continued on our way to Laos’ 4,000 Islands area.

Another catamaran was docked at the “harbour.” Instead of waiting for that boat to move, our boatman skillfully butted ours up against it and put one foot on each craft to keep them together. The boatmen looked at us with big smiles in anticipation. A quick flick of throttle as the gap momentarily closed and our front wheel made its escape from the boat, swiftly followed by the rear. I wonder how many motorcycles lay at the bottom of that river?

Palm trees swayed and the sun browned our arms as golden sandy roads led us around the island on our hunt for a beach hut. A teak cabin with a couple of lazy porch hammocks overlooking the emerald green river for $13 a night? Sure!

A Day in the Life 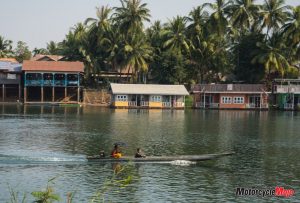 Fishermen cast their nets from skinny boats in the early morning. Water buffalo waded through for a bath a few hours later. And at midday, it was the kids’ turn to dive off their boats in search of treasure.

We had been looking forward to beach life since leaving home to ride ’round the world two years ago. But we never thought we’d find that life in Southeast Asia’s only landlocked country. A few days turned into a dreamlike week of exploring the river’s archipelago maze.

The XT was loaded with water and snacks, a little air was let out of the tires and we rode every sand-filled route we could find around the island in search of waterfalls, Irrawaddy dolphins, local taverns and abandoned French Colonial railways.

We were completely relaxed – unlike in Cambodia, where we developed an addiction to searching out ancient hidden temples every day in the searing heat. Laos life is so laid-back that days melted into weeks and it became hard to let go of the south. 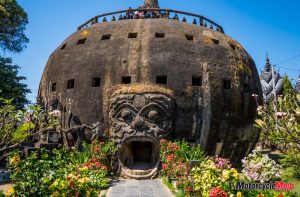 It took two long days to cover 500 km on straight roads to central Laos. It’s just too risky to go fast. Houses, wooden shacks, stalls and little shops line the main roads. They’re full of families, most of whom own livestock, so cows, chickens, pigs, dogs, cats and ducks constantly run into the road. Even when the roads are empty and the huts disappear, the odd dog lies in wait for a bike to approach before darting across the road.

Drivers coming in the opposite direction are also a massive danger because of the way they overtake. Oncoming traffic does not care when they overtake, don’t understand timing and use the entirety of the opposite lane to do it. Flying head-on toward us, they flash their lights in the belief doing so absolves them of all responsibility. It’s now our job to slam on our bike’s already overworked brakes hard enough to slow in time or we’d have to…