This rider had to trust his steed to work flawlessly in order to get him out of Spain during the country’s lockdown.

In my 12 years as a professional photographer, jobs hadn’t come much more perfect than the one I had lined up. I was to photograph five luxury glamping accommodations dotted along Spain’s and Portugal’s southern coasts. The weather in Wales had been positively awful for a month, so a trip to one of the sunniest parts of Europe couldn’t have come at a better time. To add the cherry on the cake, I would be taking my BMW R100RS along for the ride. The ferry would get my bike and me to Santander, Spain, and the rest was all motorcycle travel.

This particular 1982 RS was showing just shy of 50,000 miles (80,000 km) on the odometer and had been no stranger to travel. Over the past eight years, I have ridden my RS during visits to almost half of Europe’s 44 countries, getting as far north as John o’ Groats in Scotland and as far south as the hills of Albania.
Back in the late ’70s, the RS was dubbed the ultimate touring machine, and 40 years later the basic needs of a touring motorcyclist haven’t changed a lot.

Blistering performance and the latest gadgets are bonuses, but, in my opinion, all you really need in a touring bike is comfort, reliability and a bit of character that’ll keep you interested when the days on the road are long.

The team in Bavaria engineered this bike not for quick cheap thrills, but for longer, more meaningful journeys. Saying that, turn up the wick, tuck behind the screen and there’s nothing boring about hitting 190 km/h with ease on a 40-year-old machine. 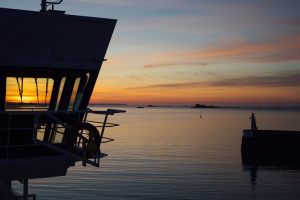 I had allowed three days to travel from Santander to my first job, in the Algarve region in the south of Portugal. While the time allotted did not allow for a leisurely sightseeing tour, there was enough time for a scenic route without blowing euros on Portugal’s tricky-to-decipher toll-road system and squaring off my brand-new rubber in the process. Crossing the Picos Mountains via the towns of Potes and Riano was no more than a morning’s ride, and the afternoon was spent dodging gravel patches and potholes on the remote mountain pass from Ponteferra, which leads into northern Portugal.

The two more days winding south through Portugal’s hills and vineyards gave me a chance to get a feel for the Lasertecs, which despite looking like 40-year-old tires, handled my immature track day-style antics well.

My evenings and mornings were spent taking photos of cabins, and the rest was spent riding on scenic routes while heading eastward to the next job. Picture it: early spring and the temperature hovering around 20 C, making life for both the RS’ air-cooled engine and me very pleasant. Hard to find fault in any of it. The roads were quiet, the scenery was beautiful and the towns were quaint and welcoming.

The background to my blissful lifestyle…