Unable to ride a motorcycle, the author thought that the next best way to see the country was by sidecar. She wasn’t disappointed.

Almost every traveller to Vietnam knows that the country’s magnificent landscapes – from the Ho Chi Minh Trail to the Hai Van Pass to the Ha Giang loop, and everywhere in between – is best accessed by motorcycle. Check your insurance coverage, download your Google map, rent a motorcycle – or drive your own – and off you go. Freedom and fun, guaranteed.

Unless, of course, you don’t drive a motorcycle – and I don’t.

Some people are born to drive motorcycles in Vietnam – or anywhere in Asia, for that matter. I admit that I am not one of those people. While I’m good at sitting on the back of a motorcycle – I take motorcycle taxis often and also ride with friends – I decided early on that the challenges of driving in the chaos of Hanoi’s traffic was not a skill I needed to develop. It’s a skill that is necessary, however, to see the best of Vietnam’s mountain region in the north of the country. 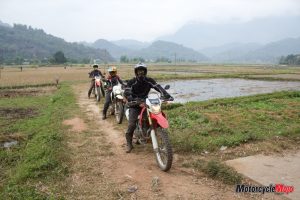 After living in Hanoi for more than three years, I was embarrassed to admit I had yet to visit Mai Chau and Pu Luong, both in Hoa Binh province some 200 km southwest of the city and close to the Laos border. I had heard much about this mountainous area, particularly how “untouristy” it was and how an authentic travel experience was still possible for a jaded Hanoian resident like myself. The sticking point? I don’t drive a motorcycle. And I didn’t have a partner who could take me either.

Keen to escape the Christmastime cold and needing a break from the hustle and bustle of Hanoi, I found a motorcycle tour company that permitted me to ride on the back of the lead driver’s motorbike. Cuong, the company’s owner and a mechanic by trade, has been in business for years. I found out later he has ferried the likes of Angelina Jolie and Brad Pitt around Hanoi on the back of motorbikes.

Cuong’s black T-shirt, emblazoned with Cuong’s Motorbike Adventure, is also famous, as it made a cameo appearance during an episode of the Archer TV series. I knew none of this. I just wanted to take a motorcycle trip on which the fact that I didn’t drive didn’t matter. Cuong’s tour, recommended to me by a friend in Hanoi, fitted the bill.

“No problem,” Cuong assured me. “You can ride on the back with the lead driver.”

So I geared up with a heavy-duty helmet and drybag on the day before we left on our journey, skipping the leathers because I was told there was no need – after all, I wasn’t driving. And this is Vietnam.

Best View in the House 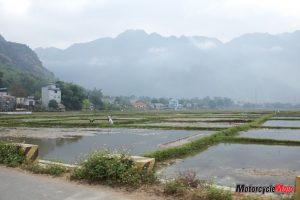 At the early-morning meeting point just outside Hanoi’s Old Quarter, I met my touring companions – an American couple and a solo Italian who were supplied with Honda CRF250s and who were first-time visitors to Vietnam. I was pleasantly surprised to learn that I was not riding on the back of a motorcycle; rather, a Russian Ural M67’s sidecar, loaded with bags and supplies, was my chariot. I climbed in, strapped on my helmet and stretched out my legs in bliss, glad for this travel enhancement.

Early morning was drizzly and misty grey as we rode along the main highway to our first stop, a roadside café. I took the opportunity to learn…