The BMW R18 has a lot of design elements gleaned from the 1936 R5 that are worthy of admiration, but that massive engine is definitely the focal point.

Ever since BMW released tidbits of information and prototype images of the R18, there is no question that the company’s new cruiser has been a hot topic of discussion among cruiser riders and those who just like the look of a classically styled motorcycle. After all, you have to admit that the R18 checks off a lot of boxes in the style department and the physical size of that engine looks as good as it is big – the engine is certainly the bike’s centre of attention.

With the release of the R nineT a few years ago, BMW is no stranger to retro-styled motorcycles. However, the R18 harkens back to almost the company’s beginning. In 1923, BMW produced the R32, its first motorcycle, and its first flat-twin boxer engine: an engine that is a hallmark of BMW’s motorcycle design to this day. That tradition continues in the engine’s latest descendent, the R18’s big 1,802 cc boxer. In addition, the R18 took its overall design cues from the 1936 R5.

Cruiser-style motorcycles traditionally are big and bold heavyweights in the motorcycle world and are distinctly a North American phenomenon. Therefore, in order for BMW to compete in the cruiser market, the company must go after the big player in the market. Bavaria-based BMW openly admits that it’s going directly after Harley-Davidson’s customers. And the R18 certainly is big and bold – particularly the massive boxer engine that’s been shoehorned into the bike’s frame. There’s no question that the engine is the centrepiece of this bike. 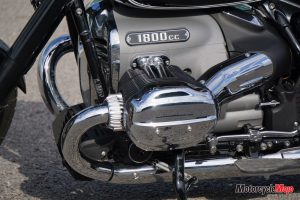 Lifting the long and low bike off its side stand takes a bit of effort – the R18 weighs 345 kg ready to ride, after all – but the immense engine sits low to make the bike’s weight deceiving. To put that last sentence in perspective, the engine, transmission and intake tips the scale at 110.8 kg. Even while inspecting the handlebar and switchgear and single old-school round instrument gauge, the massive cylinders of the engine are always within your peripheral vision. They are impossible to miss.

Upon hitting the starter button, the rotating mass inside the engine begins to rock the whole bike to the left. The engine fires to life within a couple of revolutions as the exhaust growls out the fishtail mufflers, then the engine jolts you and the bike to the left – and you can’t suppress your wide grin as you try to counter the bike’s movement. Giving the throttle a quick blip, the bike once again rocks to the left, thanks to its heavy flywheel and large pistons that sit perpendicular to the frame, and that silly, wide grin gets even wider.

The R18’s air- and oil-cooled engine has been fashioned after BMW’s first boxer engine in more ways than the basic design. The R18’s engine utilizes mechanical elements that the company has moved away from over the years, but you can be rest assured that doesn’t mean this boxer is technically challenged.

Like the 1936 R5 and the subsequent air-cooled engine designs that have lasted for some seven decades since, the R18’s valve train uses two camshafts, positioned in the engine block just above the crankshaft, that operate an exhaust and intake pushrod for each cylinder. The exposed pushrod tubes are a nice retro touch to the engine’s appearance. The valves’ rocker arms are also throwbacks to an earlier time as each valve is adjusted via a screw and locknut.
While the pushrods may speak “old school,” the four valves per cylinder, modern combustion-chamber design, dual ignition, fuel injection and electronic engine management all make up for what might be considered vintage pushrod technology.

Engine-management modes include Rain, Roll and Rock. Engine modes are pretty standard fare these days, albeit not with names like Rock and Roll. Rain mode reduces abruptness in throttle input while adjusting stability control and rear wheel slip for better control on slick roads, while Roll mode delivers more throttle response and reduces the safety net to experience more of the engine’s potential. As you might guess, Rock mode delivers a fully dynamic throttle response with less intervention by the stability control system. All modes are easily selected using a button on the left switchgear.

What is a bit unusual is that when the R18’s big boxer is in Rock mode, at idle you can feel the difference in the engine’s characteristics versus in the other modes. Rock mode’s more aggressive power strokes feel unique: I could almost imagine the pistons sliding back and forth in the cylinders as the bike rocked back and forth to the left and right a little bit with every stroke.

And Rock mode really sings at speed. Crank the throttle on the highway and the exhaust barks and the intake howls. And you’ll want to hold on. There isn’t much need for a downshift when passing slowpokes in front of you as this engine produces 91 hp at 4,750 rpm and 116.5 ft-lb of torque at 3,000 rpm – and more than 110 ft-lb is available from just 2,000 rpm. The engine on my test bike ran smoothly until the vibration began at about 3,200 rpm, but there really isn’t any need to be in that rpm range because of the scads of torque that are available below that number. To put that into perspective, the engine lopes along at only 1,750 rpm at 80 km/h in sixth gear and at just 2,200 rpm at 100 km/h, and the R18 easily accelerates with a twist of the throttle at those speeds without downshifting. 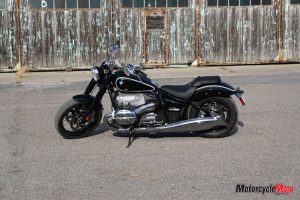 Power is transferred to a hydraulically operated dry clutch feeding into a separately housed six-speed transmission. Also taking a cue from yesteryear is the exposed high-gloss nickel-plated driveshaft and U-joint at the differential. In truth, the shaft works exactly the same as on all other BMW enclosed shaft-driven motorcycles – but, damn, this one looks pretty cool, especially if you’re a gearhead and like all things mechanical as I do.

Power is delivered from the differential to a 16-inch wire-spoked wheel wrapped with a 180/65B16 tire. Braking on the rear is via a four-piston caliper squeezing a 300 mm disc, while a pair of four-piston calipers acting on 300 mm rotors slow the front spoked wheel, which wears a 120/70R19 tire. Braking is solid at both ends, with a good firm feel on the front brake lever. However, you’ll want to watch how hard you squeeze the lever until you’re used to it. The brake lever is reach-adjustable, as is the easy-to-pull clutch lever.

Partially integrated ABS is standard on the R18, as is ASC (BMW’s version of traction control). The latter can be turned off if you’re prone to showing your buddies how quickly you can destroy a rear tire. Also standard equipment on the R18 is engine drag control, which prevents the rear wheel from locking up if you chop the throttle or downshift at a high rpm, and a slipper clutch prevents the rear wheel from hopping upon deceleration.

An LED headlight and turn signals light the way forward and let others know of your directional intentions, respectively. A cornering headlight that directs the beam into turns is available as an option. A traditional speedometer takes up the bulk of the single round gauge and an LCD display at the bottom that indicates items such as the level of heat of the heated grips, engine mode, tach, a single trip meter, average fuel consumption, speed, etc.

Another neat idea is the optional reverse gear – although I’m not convinced it’s needed because the seat is low enough to the ground to ensure good footing. The small chromed lever for reverse sits below your left thigh, making the lever easy to reach. To activate reverse gear, rotate the lever while rocking the bike slightly with the engine running in neutral in order to line up the reverse gear’s teeth, then simply press the starter button to reverse the bike.

Again, reminiscent of the R5, the R18’s fuel tank is sleek and stylish and, with its 16-litre capacity, it’s smaller than you’d expect for feeding an engine of this size. However, I averaged 5.5L/100 km; doing the math, that leaves the tank empty at about 290 km.

Watch Out for Rough Roads

The front 49-mm telescopic fork gives up 120 mm of travel and does a good job of absorbing bumps. The 90 mm of travel on the rear, on the other hand, is stiff and you’ll soon learn to avoid frost heaves and potholes. The rear shock is adjustable for preload. As I mentioned earlier, I like being able to see the machine’s mechanicals, but there are some things that look better when you can’t see them. The rigid-looking frame really looks the part: it has a well-concealed pivot point, the swingarm fits nicely into the double-loop frame and the rear shock is next to impossible to see as it is tucked underneath the seat.

Handling is cumbersome at slow speeds because of the steering geometry, but the bike handles fine at speed and turns with just a slight push on the grips. Again, the low centre of gravity makes the bike feel lighter than it really is. 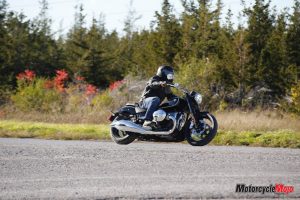 The ergonomics are comfortable and the seat was fine once I was on smooth tarmac. The seat is firm and wide enough for good support, and I easily spent a couple of hours at a time without any discomfort. I’m not sure you could tour across the country on it, though. The handlebar is wide – you certainly will notice that when the steering is turned to full lock and you try to reach the “far” grip – but, overall, its relationship to the seat is comfortable.

Mid-mount foot pegs are standard, but my test bike had the optional floorboards with a heel/toe shifter installed. I wore bulky riding boots, and I found the quarters for my feet quite confining due to the massive engine cylinders encroaching on the already limited foot space. Because of this and the bulky boots I was wearing, I took some time to find the shifter and the rear brake pedal consistently.

Cruiser riders have come to expect plenty of accessories that customize their bikes. Exhaust, handlebars, seats and machined engine parts are just some of the many accessories that are available for the R18.

The R18 is minimalist by design, but the attention to detail shows in spades. The fit and finish of the black paint with white pinstripes, the chromed engine cases that highlight the huge engine and the spoked wheels contribute to this beautiful piece of work.

The R18 commands the attention of all bystanders. And your riding buddies will surely take notice when you effortlessly blow by them on the highway.