Sometimes browsing classified ads costs you money, but other times it may work out for the better.

I’ve often joked with Motorcycle Mojo editor Glenn Roberts that I should refrain from perusing online classified ads because, as I wrote in a recent column, “it’s something I do regularly that ends up costing me money and garage space.”

Well, I did it again.

However, my most recent purchase, a 2003 Harley-Davidson XLH 883 Custom, differs from any other motorcycle purchase I’ve made in the past. I bought this one so that I could flip it; in other words, I bought it with the intention of selling it for a profit.

First, the backstory: I was sitting at my computer with my morning coffee, when I came across the Kijiji ad for the 2003 Sporty. The ad having been posted less than 11 minutes prior, it appeared near the top of the page, but what caught my attention was the asking price. At just $2,000, it was well below market value. The description told the story of an exasperated owner.

“I’m selling my Sportster,” the ad stated, “because it doesn’t start, and I don’t have the time or money to get it running. It backfired and the air filter caught on fire, so I replaced it. The battery is dead.” 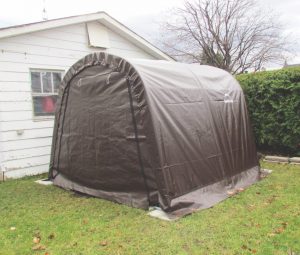 The ad went on to describe some of the modifications done to the machine, including an ape-hanger handlebar and an LED headlight. The exhaust was original. Looking at the pictures, I could see that the bike had been repainted, the rear fender chopped and there was no front fender. Aside from that, though, the bike seemed to be in good shape. I made arrangements to meet the owner that evening. However, before going to see the bike, I capped the price I was willing to pay for a non-running Harley at $1,500 – if he agreed and the bike didn’t have any major issues, it would come home.

I arrived at his house in the darkness of a late October evening, armed only with a flashlight and a wad of cash. The bike was parked outside, covered in cobwebs. Upon meeting the seller, he explained that it was his first bike and it had refused to start one morning. The engine had cranked over, backfired through the carburetor (hence the air-filter fire) and sputtered but refused to run. The sputtering gave him hope that the engine would eventually start, which is why he tried starting it until he drained the battery he bought earlier in the season. He eventually gave up and bought a much newer, fuel-injected Ducati Monster. Meanwhile, the sick Sporty sat outdoors – its battery drained – and its owner dejected but happy with his new purchase.

There was no point in trying to start the bike, so I had a good look at it with my flashlight and saw that aside from looking somewhat ratty due to months of exposure to the elements, it was complete and mostly untouched. Under a thin coat of spray paint, the engine covers were in their original finish, and the owner had confirmed that the engine’s displacement was still its original 883 cc. Many Sportster owners boost displacement to 1,200 cc, which adds power but may create other problems; done wrong, the engine can detonate and melt, and the starter can fail.

I shifted the bike through its five gears, and rolled it forward in gear to feel that the engine still had good compression in both cylinders. That’s really all I needed to confirm that this Sporty was intact. I know Sportster engines very well, and if they are untouched by unskilled hands, they are bulletproof. This one was untouched. 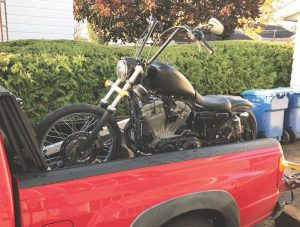 I offered him the money I had in my pocket. He agreed and we loaded the bike into my pickup, along with a box of parts – including the front fender.

Once home, I charged the battery and cranked the engine over. It sputtered and coughed. I initially suspected the wiring, as it had been extended when the ape hangers were installed and all connections formerly located inside the headlight housing were now under the gas tank. But, on a whim, I replaced the spark plugs. (I had a new set for my Sportster street tracker.) To my complete astonishment, the next time I hit the starter button the engine fired up and ran perfectly. I suspect that being a new rider, the former owner had let it run too long on the choke and fouled the plugs.

Of course, my latest acquisition has led to the purchase of a temporary shelter to make room for more bikes, although I think I’m good for a while. I’ve been working on the bike, and so far the biggest expense I foresee is a new coat of paint. I do have one dilemma, though. If I spend enough time working on a bike, I get attached to it.