Not only does this area offer spiritual enlightenment, it also promises some excellent riding and scenery.

I had too much crap on my bike. Looking at it from the side, it was akin to an adult sitting alone on playground teeter-totter. But then again, I was heading to the Centre of the Universe. I took the opportunity to purge some items from my loaded steed, removing my extra down vest, the backcountry water filter (this is British Columbia after all, land of fresh mountain water) and my spare flashlight. The balance point was a bit better as the pendulum swings to the middle. Time to head off.

My destination was a somewhat remote locale that boasts it is the Centre of the Universe, a place of spiritual and earthly significance nestled in the heart of an expansive plateau north of the Thompson River, about 450 km from my home in the Okanagan Valley. In 1980, a Buddhist monk on pilgrimage from San Francisco (the City of Love, no doubt), was drawn to this location in B.C., feeling a convergence of energy. We are talking about spontaneous fire and the faint sound of choral singing – no kidding, and this place has garnered the attention of many folks seeking a deeper meaning to this world, even being highlighted in mainstream media such as the Globe and Mail. 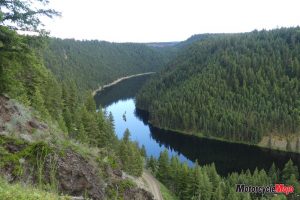 Rather than beeline it, I charted a course to the Centre of the Universe that is a mixture of sparsely travelled paved secondary roads and forest service roads. The first stretch on my journey took me from the Okanagan over to Allison Creek and Aspen Grove (lovely names) via the Princeton-Summerland Road. This route follows the iconic portion of the former Kettle Valley Railway, the tracks were lifted decades ago but the trestles remain intact and the path is now part of a popular cycling network that links small communities on the eastern edge of the Cascade mountains and over the Monashee Mountains. I skirted several rain squalls along my route and happened on only a few vehicles as I rode over the pass, including two riders travelling in the opposite direction astride newer African Twins. (I was slightly envious.)

My destination on the first night was Spences Bridge, and after fuelling up with some late afternoon sushi in Merritt, I embarked on the final stretch of the day along the stunning Highway 8, which hugs the Nicola River to its confluence with the Thompson River. Bighorn sheep, eagles and sculpted clay hoodoo formations were eye candy along the way.

Rolling into Spences Bridge, with the sun already hidden behind the towering mountain known as Arthur Seat, I scoped out the free campground that lies along the south side of the Thompson River. However, even on this early summer day, the river was still in full freshet and the campsites were fully submerged, the picnic tables islands in the swirling water. Aiming for a bit higher ground, the Acacia Grove RV campground across the river fit the bill nicely.

Once a Thriving Community 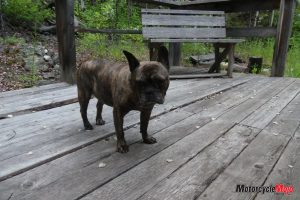 Upon riding up to the entrance of this campground, a tall, handsome Indo-Canadian man walked up to my bike and welcomed me with open arms. Turned out Amarjit Singh Dhillon (he prefers Dhillon) is not only the new…