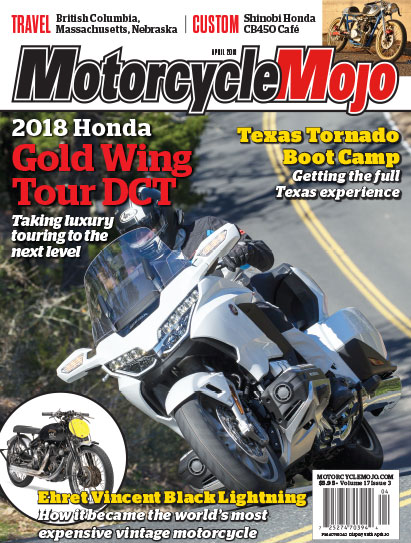 Our April 2018 issue of Motorcycle Mojo features the all-new 2018 Honda Gold Wing Tour DCT. Costa Mouzouris was at the international press launch in Austin, Texas and while sub-zero temperatures and freezing rain did hamper the ride somewhat, the bike did offer a good indication of just how well protected the rider is from the elements. We’re predicting this new Wing will be one of the most important motorcycle releases of the year.

Our travel features in this issue take us to southern British Columbia as author Trevor Marc Hughes makes his way to Nakusp for a Horizons Unlimited Travellers Meeting, Ron Keys reports on his ride into hills of Berkshire County in Massachusetts and Jamie Elvidge heads to the sandhills of Nebraska. Nebraska is not a bucket list destination for many riders, I’m sure, but as as Jamie puts it: Yes, Virginia, there are great motorcycle roads in Nebraska.
Misti Hurst heads to Texas to take some training at Colin Edwards’ Texas Tornado Boot Camp where she gets the whole Texas experiences with motorcycles, guns and beer.

All this plus much more awaits you, so get inspired and start preparing for the riding season with tours, tech-tips, reviews and all the latest industry news found in the April 2018 edition of Motorcycle Mojo Magazine.