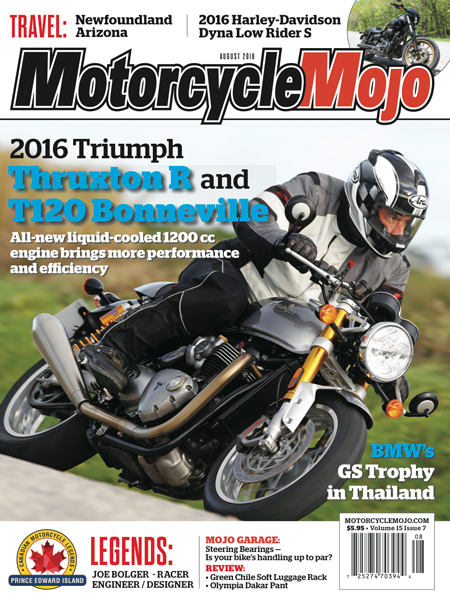 Summer is finally here and so is the August 2016 issue of Motorcycle Mojo. On the cover you’ll see Costa Mouzouris riding the winding roads of Lisbon, Portugal during the world press launch of the all-new, liquid-cooled 2016 Triumph Bonneville T120 and hot-rodded Thruxton R. Back here at home we’re putting some hard miles on Harley’s sensational 2016 Low Rider S, and come up with a long list of excuses for not wanting to give it back.

Globe trotting editor Mouzouris is at it again with his tale from the 2016 BMW GS Trophy in Thailand, where mud, oppressive heat and precarious positions push competitors to the limit.

In this month’s installment of Legends, Greg Williams delves into the long and varied life of Joe Bolger, and his continuing contributions to the motorcycle industry.

While traveling the coastal roads of Western Newfoundland, Ron and Tina Keys familiarize themselves with a wealth of local history and unique traditions.

On the other side of the continent, Tim King and his son take a day to explore Arizona’s Superstition Mountains over the Christmas holiday.

And, join us in Port Dover for the launch of the 2016 Harley-Davidson Roadster as we take some time to talk with Harley Canada boss, Anoop Prakash and Davidson family members – and company execs – Bill and Karen Davidson.
All this and much more in the August 2016 issue of Motorcycle Mojo.