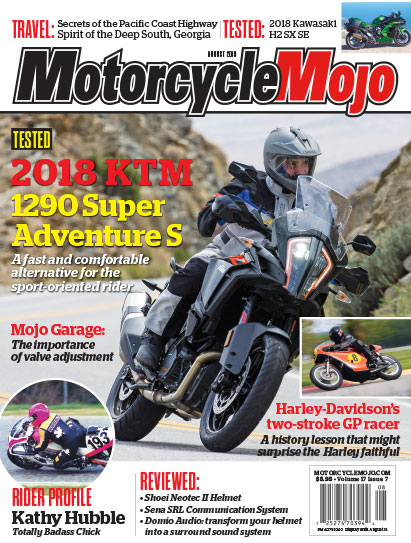 Our August 2018 issue of Motorcycle Mojo features an article by Costa Mouzouris on the KTM 1290 Super Adventure S, a 160 horsepower pseudo-adventure bike with a penchant for speed and acceleration on the road. If you’re a sport bike rider looking for more comfort, this might be the bike for you?

Jamie Elvidge takes flight on the new Kawasaki Ninja H2 SE SX; a supercharged, 200 horsepower goliath made for hitting point A to point B in a hurry. The SE comes with panniers so you can pack them up and head into the wild blue yonder for a weekend or longer.

Elvidge also sent in a number of travel tips and secret hidden gems for those heading to the Southern California’s Pacific Coast Highway. While some of the secrets are on the main highway, others are treasured side roads you may never know about unless you convince a local rider to let you in on such secret getaways.

While visiting the Horizon’s Unlimited Travellers Meeting in West Virginia, Jeff Davison decided to stay on the road and take in some of the scenic byways that Georgia has to offer. Not only did he find amazing roads in the Peach State, he also found that Confederate pride is alive and well, and for some, the Civil War is barely over.

Alan Cathcart tells us of an unlikely competitor on Europe’s GP circuit in the mid-’70s. It might come as a surprise to the Harley faithful that the Motor Company had a two-stroke, parallel-twin entry competing against the fastest race bikes of the day, and it actually made a few podium appearances.

All of this and so much more in the August 2018 edition of Motorcycle Mojo magazine.