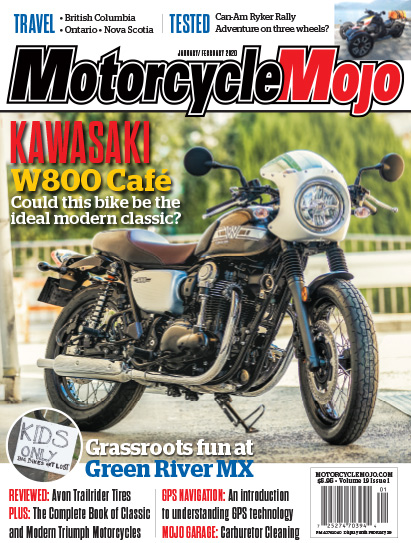 Our January/February 2020 issue offers three travel features from across the country. Let’s begin on the West Coast, where Brent Larose finally reaches his destination on the west coast of Vancouver Island before making his way northeast to the town of Port Hardy and a 16-hour ferry ride to Prince Rupert. Brent finally makes it home to Calgary, but not without some trials and tribulations.

Our next travel story takes us to Central Canada and a multiple-loop ride in the Ontario Highlands. This area of Central Ontario is arguably the best riding the province has to offer. John Lewis recounts his ride on roads that twist around massive rock outcroppings of the Canadian Shield and more than 1,000 lakes.
Next, it’s off to Canada’s East Coast and Ron Keys’ tale of the fantastic roads along Nova Scotia’s Bay of Fundy coast, where you will meet the friendliest people.

On the testing front, Jamie Elvidge gives us the lowdown on the Kawasaki W800 Café. She includes a bit of history on the café racer category and attempts to mimic the reason that style of motorcycle exists in the first place.
In addition, David G. Williams’ ears perked up when he heard Can-Am’s claims that its Ryker Rally edition will “take your ride off of the pavement and unleash it on even more playgrounds.” With that in mind, he decided to see how well the Ryker Rally performs during a wild camping trip in rural British Columbia. As it turns out, there were some lessons to be learned!

All this and so much more in this issue of Motorcycle Mojo magazine.