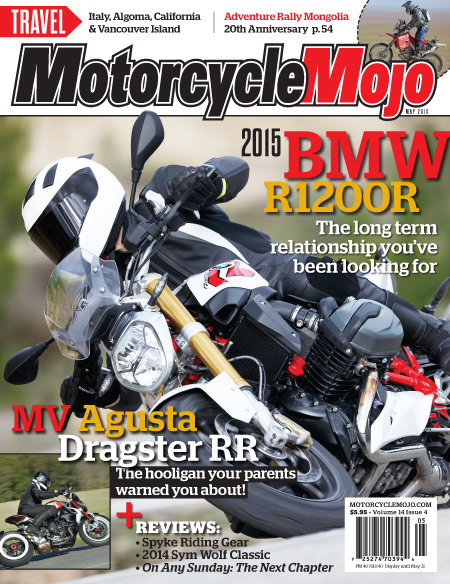 The 2015 BMW R1200R – The Gentleman’s Roadster – graces our May 2015 cover, and rightly so. While the R1200R model isn’t new, the 2015 version has been redesigned in many areas and now utilizes the newest liquid-cooled boxer engine. We also bring you the MV Agusta Dragster RR, one of the sexiest bikes on the planet. The RR has a few upgrades over the regular Dragster not the least of which is an extra 15 horsepower, bumping the 798 cc, three-cylinder engine up to 140 ponies.

Travel articles include a trip to Italy, partly to ride the Amalfi Coast but also to see where the author’s grandfather, along with 16,000 Canadian troops, came ashore in a 1943 invasion of Sicily. Lawrence Hacking takes us to Rally Mongolia to experience the eight-day, 3800 km grueling rally. In addition to those travel pieces we feature an article from Algoma Region in Northern Ontario, a ride from British Columbia south to California and then east to the Sierra Nevada, and a day-trip circle tour on Vancouver Island round out the travel features for the May issue. All this and so much more.