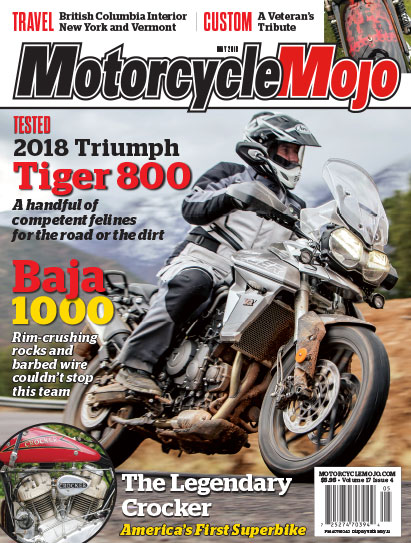 Our May 2018 issue of Motorcycle Mojo features the all-new 2018 Triumph Tiger 800 line up. Costa Mouzouris was at the international press launch in Marrakesh, Morocco to try out the new off-road oriented XC and the XR. These Tiger promise to be the most advanced line of felines ever produced in a long line of Triumph Tigers.

Shane Scott reports about his trials and tribulations while competing in the 2017 Baja 1000. While his team finished the race with zero penalties, the race certainly wasn’t without its problems.

Alan Cathcart gives us a run down of the rise and fall of America’s first super bike. The V-twin Crocker motorcycle was the brainchild of Al Crocker, first released in 1936, and became the fastest American motorcycle of its day, untouchable by both Indian and Harley-Davidson.

Travel features include a ride into upstate New York and neighbouring Vermont. And on the other side of the continent, we feature a spring ride that maybe should have waited until the spring rains and runoff had subsided. The resulting ride didn’t proceed as planned as many road and bridges were washed out.

Misti Hurst tells us of a British Columbia airbrush artist that custom painted a Canadian Forces veteran’s Dyna Wide Glide. The paint pays homage to the veteran and all he experienced while serving in the military, and the emotional unveiling of the surprise paint job to the bike’s owner.

All this plus much more awaits you in the May 2018 edition of Motorcycle Mojo Magazine.