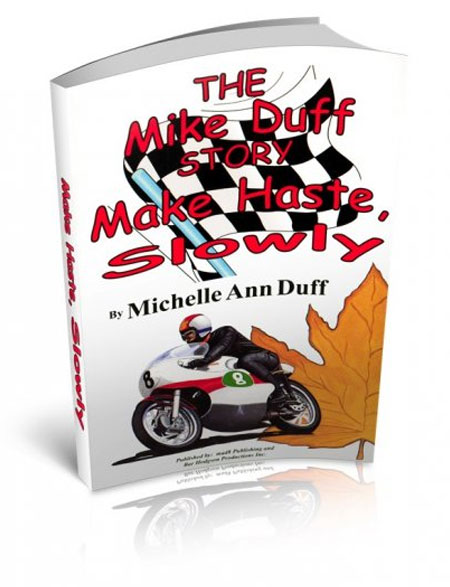 A 330 page saga set on the Continental Circus of European racing from 1960 to 1967. It is a race by race chronicle of Canada's foremost Grand Prix rider, Mike Duff. Mike came from humble beginning learning his craft on abandoned airport curcuits near his home in Toronto. Coming to England in 1960, he rose through the ranks as a struggling private rider on British short circuit racing, riding privately owned 350 AJS 7R and 500 G50 Matchless machines to compete as a factory contracted Team Yamaha rider. He never won a world championship, nor an Isle of Man TT, but he rode some of the most exotic racing machinery ever built on glamorous race courses that are but names in a book to most. He mixed it with the best of the time and often emerged victorious. Share these experiences in detail from the perspective of his seat aboard a “works” Yamaha RD56 or RA97, a Matchless G50 or 7R AJS, or the legendary AJS Porcupine.

There are no reviews yet.